HAVANA TIMES – I like the word “brutal”. I like how it sounds, its multiple meanings, as well as its precision, in every context that it’s used in.

Brutal Combo was a sequence of blows of more than five hits and less than ten in Killer Instinct. It was one of the first meanings of the word that I would then use on a daily basis, when the first video console reached Santo Suarez, in 1994. It was at Adela’s house, the most charismatic woman on the whole of Lacret street. She would lend out her Super Nintendo for 10 pesos per hour, with the same charisma, in the middle of the Special Period.

A quick Google search tells us that brutal is something “violent, cruel and inhuman”. Somebody who “was accused of leading a brutal government, where thousands of people have disappeared in mysterious circumstances.”

As well as referring to a person with a violent nature, this word also means big, strong, good or intense. We can both say that somebody gave someone else a brutal beating, or we can say that someone has a brutal ass.

There’s also brutalism as an architectural style. The term comes from the French expression “béton brut” or “raw concrete”, that Le Corbusier used to describe a selection of materials that would go on to shape an aesthetic paradigm that other professionals in the field joined. Further down the road, British architectural critic Reyner Banham adapted the term and renamed it “Brutalism”.

Generally-speaking, brutalism is more of an everyday, systematic thing for me, and it’s the way that the brutal aspect of reality has ended up the most striking. Almost everything is brutal. The “brutality” in the way somebody treats another, in the price of products, in the beauty of a pair of shoes, in the size of a bosom. Something that moves between the simplest, the most subtle and the most insignificant.

The heat is brutal even when we are in winter. A plastic water bottle can seem like a diamond if a ray of sunshine pierces through it in the right place. Our water is quite dirty, but you can still drink it. “It lets you drink it,” as we normally say. A man and woman were going so fast on their motorbike one day, that their bottle of water fell off and they didn’t even realize. It stayed there in the middle of the street. It looked like a dose of thirst quenched. Not a label on it, not a sign. Light penetrating transparency and reminding us of shortages. Brutal shortages.

There is a military unit on the ground floor of my girlfriend’s building. It’s just a few square meters with closed windows at all costs, and a few air conditioning units in sight. Teenage recruits go in and out, they sweep the gated backyard and hang out olive green uniforms on the fence. You see police officers and other Ministry of Interior officials passing by the unit. Some neighbors from the building too. The dryness that comes from this perimeter is brutal. A dirty workplace. With the basic and essential conditions needed to guard (the main objective) and punish (when the time comes).

The chair is normally there, properly protected, when the young officer isn’t doing his job in the building’s lobby to stop my girlfriend, me, or both, from going outside. Sometimes, the chair is empty and under the stairs, and that’s when I think of a dwarf officer. The chair appeared once when the officer had to work for an entire week.

When he isn’t there, I look at that piece of furniture and remember him. Wearing long sleeves, his head normally covered, earphones always in. Sometimes, he has an empty pot on a wall with left-overs of rice, a spoon and a plastic bottle of water.

—Sunlight passing through an aluminum shutter with brutal beauty.

—They have covered up the building entrance in a brutal way, with brass, white metal angular brackets and screws to put in a lock on doors.

—A dead rat inside a white Polyethylene food packing is brutally beautiful.

—It’s particularly brutal the way a police tonfa and a machete with a wooden handle look alike.

—It’s brutal the way that neighbors remind you that they are watching you.

—It’s brutal the way that a book holds up a piece of furniture, like Atlas holding up the sun.

—A brutal areca palm insists on growing under a staircase, which was built in the ‘50s by an architect who was committed to the Modernist Movement in Havana.

—Everyday brutalism is brutal. All around us. 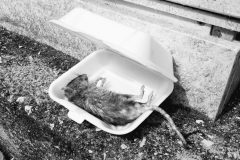 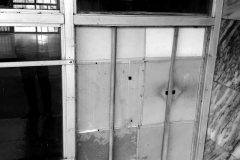 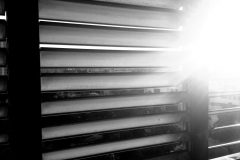 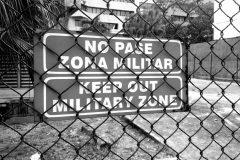 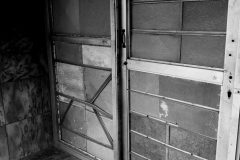 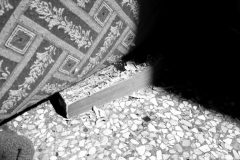 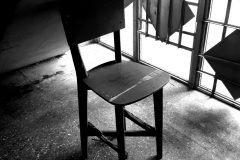 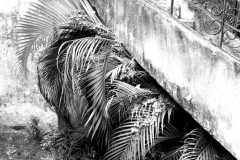 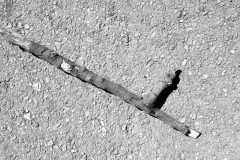 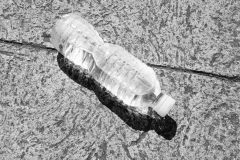 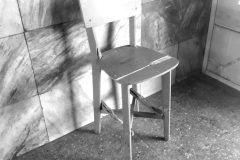 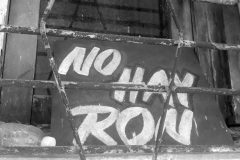 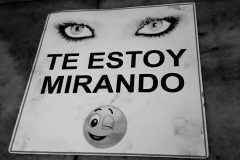