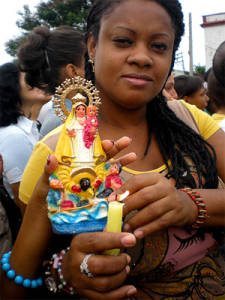 The visit by the Virgin in this province is part of the pilgrimage that began on August 8 last year in Santiago de Cuba. The image of the saint will be in the capital from November 6 to December 10, 2011.

Starting early in the morning, Marianao residents gathered at the Jose Marti Civic Plaza, waiting for the figurine of the Virgin, which was taken to several churches in the municipality on previous days. Those in attendance were everyone from practitioners of the Catholic faith to people of other religious denominations, as well as curious atheists.

On arrival in the square, everyone gathered to greet and photograph the venerated figurine. Several people showed strong emotions — to the point of tears — for being in such close proximity to the Virgin. Many people were dressed in yellow garments and carried flowers of that same color, which identify the virgin.

During his homily, the archbishop of Havana recalled the legend behind the image of the Virgin. According to this tale, the virgin appeared floating in the water before three fishermen in the Nipe Bay in eastern Cuba in 1612. Since then, the syncretic nature of some religions on the island has led to the widespread cult worship of the saint.

To offer communion during Mass, four priests came down from the platform on which the altar rested and mixed in with the people who had gathered.

Next year will mark the 400th year since the discovery of the image; therefore, a large number of believers are expected to make pilgrimages to the shrine of the Virgen in the town of El Cobre, in Santiago de Cuba Province.

It seems that this important anniversary is what made Pope Benedict XVI decide to visit the island next year. According to statements from the Holy See, the world leader of the Catholic Church will visit Cuba sometime during the spring. Ortega announced the news to all those present, who displayed signs of joy.

Cuba has received only one such visit, in 1998, when Pope John Paul II came to the island. On that occasion, the Virgen de Caridad was crowned by the Pope personally.

Cardinal Jaime Ortega (the senior Cuban Catholic leader) thanked the people of Mariano for their attendance and enthusiasm. He also recognized the support provided by the Ministry of the Interior and government agencies at all levels for the successful carrying out of the event. This included the state-televised speech by Ortega to promote the religious journey of the figurine.

Among the church leaders present who were highlighted was Father Carlos Manuel de Cespedes, an important Cuban religious leader and intellectual who is the descendant of one of the main Cuban independence heroes, of the same name, who is considered the “Father of the Fatherland.”

On the itinerary, the Catholic Church’s organizers have included parishes, hospitals, cemeteries, and colleges in the fifteen municipalities that comprise the capital. In Marianao, the image visited CUJAE University, a major campus that has produced many Cuban engineers.

In addition, at the end of the accompanying photo gallery, one can view pictures of the visit of the “Mambi Virgin” to churches in El Salvador and San Francisco, and to the communities of Cocosolo and El Palmar.

The final Mass of this national pilgrimage is scheduled for December 30 on Avenida del Puerto, near the Havana Cathedral.

One thought on “The Virgin Comes to Marianao”